At a distance of 17km from Vathi, lies the village of Stavros, which is the market centre of Northern Ithaca. The village is built at an altitude of 110m, overlooking the bay of Polis, the channel, and the Cephallonian coast. The houses stand apart from one another, on an extended area, up to the small settlements of Pilicata and Kalyvia, also belonging to the community of Stavros. Stavros has quick access to many places and beaches with asphalt roads linking it to the villages of Platrithias (3km), Anoghi (5km) and Frikes (3km).

In the 16th century, the presence of pirates decreased, allowing the people from the neighbouring mountain villages of Anoghi and Exoghi to settle there, cultivate the fertile land, and use the nearby ports of Polis and Frikes. The geographical position was the reason for the quick growth of the area, and although Stavros was never a crowded place, it became the important crossroad for commerce, trade and transport for the people of the surrounding villages.

During the Venetian period, the monastery of Agios Nicolas was functioning. Today only the church remains. Later on, in the 18th century, primary schools were built. With further growth in the 1900's, the Post Office provided a bank and telegraph service for Northern Ithaca, and in 1937 a private business created and supplied electrical power to Stavros and the other villages of the area.
The population today is less than 300 people with cultivation, fishing, trade and tourism being the main activities.

In the centre of the village there is a small park featuring the only sculptured bust of Odysseus which was made several decades ago. There are few traditional buildings that survived the earthquakes, the most important architecturally being the Tzovanatos house, built during the Venetian period.

Stavros has plenty of taverns, cafés, shops and many private rooms to let. There is also a doctor’s surgery with basic medical facilities and a telephone service for international communication in the post office.

A road 2km from Stavros brings you to the picturesque bay of Polis which is the nearest port. The beautiful large beach is used daily by the permanent residents and visitors and there are also a few fishing boats which use the channel between Cephallonia and Ithaca.

Out in the bay lies the Byzantine city of Ierousalem destroyed by a strong earthquake in 967 A.D.

On the left coast of the bay is the Cave of Louizos. This place was found to have been used as a temple to worship the Gods from ancient times until the 1st century A.D. The excavations and explorations of the cave resulted in the discovery of many tools, pottery, objects of daily use and dedications to the ancient Gods, Nymphs and Odysseus. Considered a very important finding archeologically, is part of a female face mask made of clay engraved with the word “?Y??? ???CC??” (Dedicated to Ulysses). This can be seen among many other interesting objects at the Stavros Archeological Museum.

Travelling towards Platrithias, just outside of Stavros, is the hill of Pilicata (of Hermes) which according to most interpretations was the city of Odysseus. After a series of excavations, ruins of building, walls and roads were discovered on the hill dating from the Neolothic up to the Corinthian period. Several of the objects found are in the museum which is located at Pilicata.

The possibility that the ancient city was located at this site is strengthened by Homer's description in the Odyssey. According to his writings the city was situated between 'three mountains': Pilicata is in the middle of Mt. Neritos, Mt. Exoghis and Mt. Marmakas. Also he writes of having in view 'three seas": the hill overlooks the channel to the west, Aphales bay to the north and the bay of Frikes to the east. The city was situated at this particular location, not only for its strategic advantage, but also because of its fertile land and availability of water.

In the main square stands the central church of Stavros, "Sotiros", which is built in the traditional Byzantine design. The festival of Sotiros is the biggest on the island taking place over two days, the 5th and 6th of August. Sotiros draws Ithacans from all parts of the island, Patra and Athens, as well as many non-Ithacans from neighbouring areas who come to enjoy the food, live music and dance. 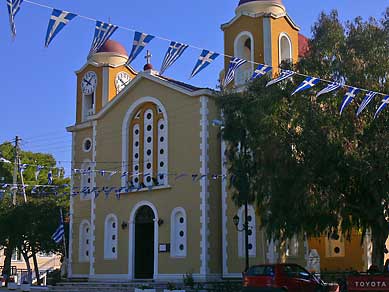 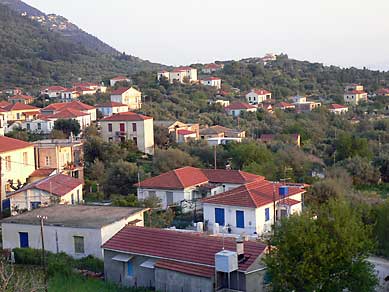 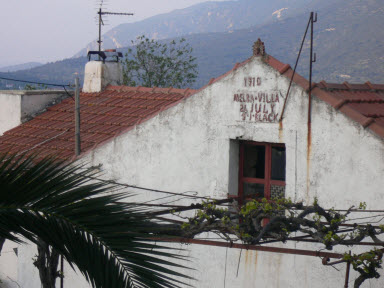 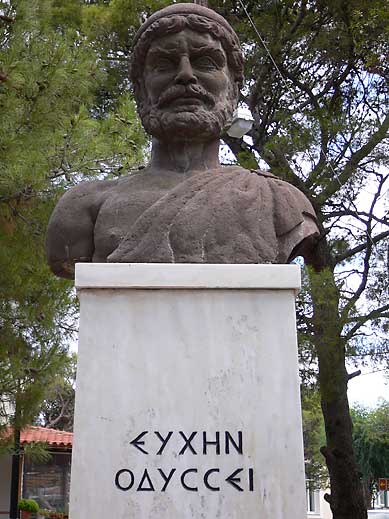