Excavations at Odysseus Palace on Ithaca to resume after ….
https://www.keeptalkinggreece.com
August 23 2018

Excavations at the archaeological site believed to be the Palace of Homer’s epic hero Odysseus on the island of Ithaca are to resume after the Prime Minister promised the necessary funding.

“The Prime Minister has assured us that the excavations at the Palace of Odysseus will resume,” the mayor of Ithaca, Dionysis Stanitsas, said in an interview with the state news agency amna. Like a modern Odysseys Tispras visited the island on Tuesday to announce that Greece finally reached its target and exited the bailout agreement.

“We discussed the issue of excavations in Ithaca where the palace of Odysseus was located. The municipality finances with 120,000 euros the efforts of the Ministry of Culture and the municipality to promote the site,” the mayor said.

For 16 years archaeologists from the University of Ioannina carried out excavations in Agios Athanasios of Ithaca until 2009. Then they stopped due to lack of funding and the economic crisis.

“The Prime Minister assured us that he would help the Ministry of Culture with extraordinary funding to continue the excavations,” Stanitsas said.

The excavation site is believed to be a large Mycenaean palatial building complex occupying two levels. A stairway cut into the solid bedrock of the hill provided easy access to the two levels. Other finds on the site include a funerary enclosure, a large circular structure whose purpose is unknown, several storerooms and workshops, a sophisticated drainage system and fragments of pottery.

The complex also features and a well from the 8th century BC, roughly the period in which Odysseus is believed to have been king of Ithaca.

The complex is believed to date to around 1300 BCE.
The Greek archaeologists have claimed that the palace was the home of Odysseus, the famous hero of Homer’s epic poem.
The location “fits like a glove” with Homer’s description of the view from the fabled palace, the archaeologists claim.

The layout of the complex, where Professor Thanassis Papadopoulos and his team have been digging for 16 years, is very similar to palaces discovered at Mycenae, Pylos and other ancient sites.

Evidence that the Odyssey and Iliad may be true after all

Archaeologists believe they have found the palace of Odysseus, the legendary Greek king of Ithaca and hero of Homer's epic poem.

They believe that the 8th BC century palace which they have discovered in Ithaca, in the Ionian Seas west of mainland Greece, proves that he was a real historical figure.

It is the only one of the palaces mentioned in Homer’s epic poems that hadn’t been found. 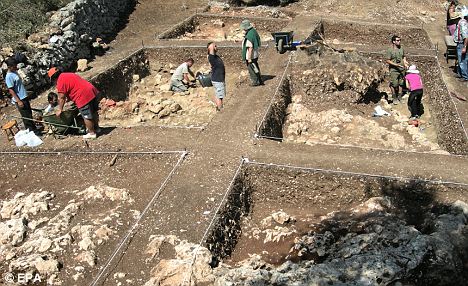 Greek archaeologists believe they have found an eight century BC palace on the island of Ithaca, fuelling theories that the hero of Homer's epic poem was real. The excavations have been made in the Aghios Athanassios area of the Ionian island. 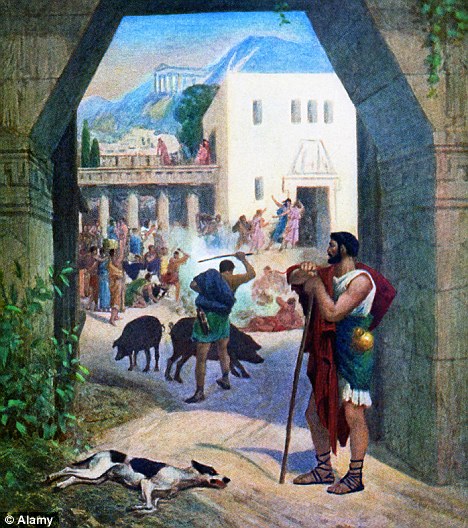 Legend: The story of the King of Ithaca's ten-year journey home is an enduring classic - now it seems that his home really existed

For many years, Homer's other epic The Iliad - telling the story of the protracted siege of Troy by the Greeks which culminated in the deployment of their Wooden Horse ruse - was regarded as a myth.

But then in the 1870s, the German archaeologist Heinrich Schliemann rediscovered the city in modern-day Turkey.

The views from the ruins found on the island of Ithaca by the University of Ioannina are exactly as described in The Odyssey, says Professor Thanassis Papadopoulos who led the team.

Known to the ancient Romans as Ulysses, the Greek hero famously took ten years to return home to Ithaca after the fall of Troy. 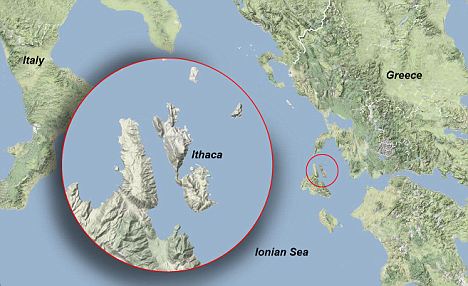 Archaeologists believe the palace which they have discovered in Ithaca, in the Ionian Seas west of mainland Greece, proves that Odysseus - known to the ancient Romans as Ulysses - was a real historical figure

'According to evidence so far, which is extremely significant, and taking under consideration scientific reservations, we believe we are before the palace of Odysseus and Penelope; the only one of the Homeric-era palaces that has not yet been discovered,' said Professor Papadopoulos.

On his journey, he was shipwrecked and encountered many obstacles before returning to Ithaca, where he found his wife, Penelope, under pressure to remarry from a host of suitors. He then has to reassert his rightful place as king.

However Professor Papadopoulos faces an uphill struggle persuading some of his colleagues that he really has discovered the home of Odysseus.

One British researcher, Robert Bittlestone, insists that Homer's description of ancient Ithaca bears little resemblance to the island that now has its name and that Odysseus's kingdom was located on the isle of Cephalonia.

But Adriano La Regina, an Italian archaeologist, has a more pragmatic approach: 'Whether this find has a connection with Ulysses or not is interesting up to a certain point, but more important is the discovery of the royal palace.'