Anoghi, located at an altitude of 500 m above sea level, is the highest of all the island's villages. It is also one of the oldest villages, established during the Middle Ages, with its elevation providing refuge from the pirates who sailed the Mediterranean during this period.

This interesting little village can be accessed by two routes; one being direct from Vathy, turning at Agros and passing Kathara; and the other from the north of island via the Stavros road. Both routes offer scenic views with the Stavros route providing stunning views of most ofl the northern villages, whilst the Agros route, winding as it does round a mountainous area, features specatular rock formations, olive trees and several vineyards.

Anoghi's Church of Panayia was originally built during the Byzantine period. Interesting frescoes were added over different time periods. Following the destruction caused by the 1953 earthquakes the church was restored. It is thought that the site of the church was the location of the temple of the Goddess Hera. 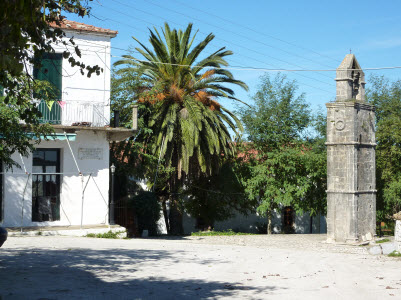